Importance of PR for Brand Building 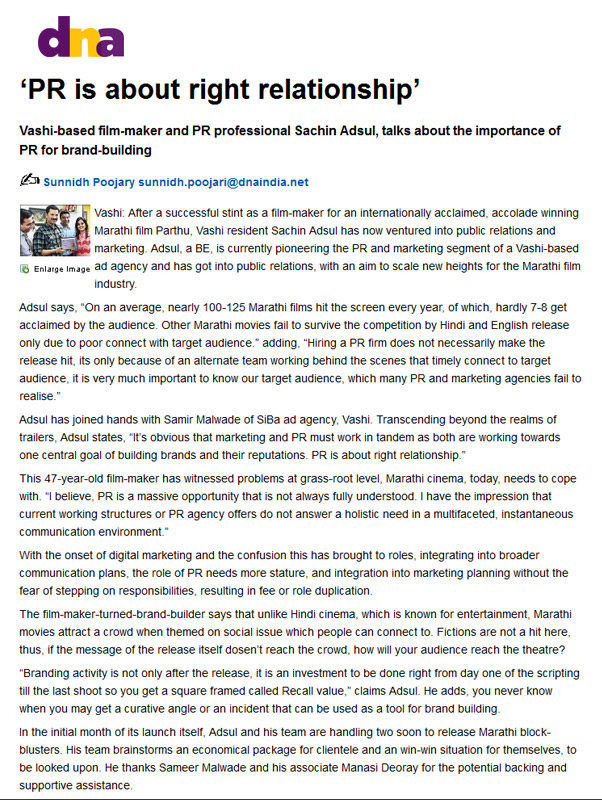 Mr. Sachin Adsul, internationally acclaimed filmmaker for Marathi film Parthu has now entered into the PR and marketing field through Ad agency in Vashi. As per Adsul, only few Marathi films are getting acclaimed while majority of films fail due to poor connect with audience. He says just hiring PR will not make release hit, key is to know target audience which many PR and Marketing agencies fail to realise. Marketing and PR must work in tandem. Ultimately PR is about right relationship. He says, PR is a massive opportunity that is not always fully understood. He believes current working structures or PR agency offers do not answer a holistic need in a multifaceted, instantaneous communication environment.

The film-maker-turned-brand-builder says that Hindi cinema is known for entertainment, whereas Marathi movies attract crowd when film is based on social issue which people can connect to. So, if the message of the release itself doesn’t reach the crowd, how will audience reach the theatre? He adds further that Branding activity is not only after the release, it is an investment to be done right from day one of the scripting till the last shoot so you get a square framed called Recall value. He adds, you never know when you may get a curative angle or an incident that can be used as a tool for brand building.